Why did the stock market drop so violently on Thursday, after rallying so sharply on Wednesday?

Bond math can help answer this question. (In case you are new to this column…yes, I am a bond geek. And/or a derivatives geek. And/or, just a geek).

An equity security can be thought of as a perpetual bond that pays a dividend that increases over time and is discounted at a real interest rate. (Obviously, this construction runs into problems when we think about companies that don’t pay dividends, so we often look at earnings instead. In what follows, I use Bloomberg’s series for trailing 12-month EPS before extraordinary items.)

The chart below shows the index in blue. The interesting series is in red. In that series, I created a make-believe 30-year bond that has a coupon of the current S&P EPS, a principal amount that increases with CPI, and a yield to maturity of the current Earnings Yield plus the current 30Y TIPS yield. Think of it as a sort of TIPS bond that pays the current earnings of the stock market.

Both series are indexed to December 2002 as 100. You can see that this series does a decent job of tracking the stock market as a whole. 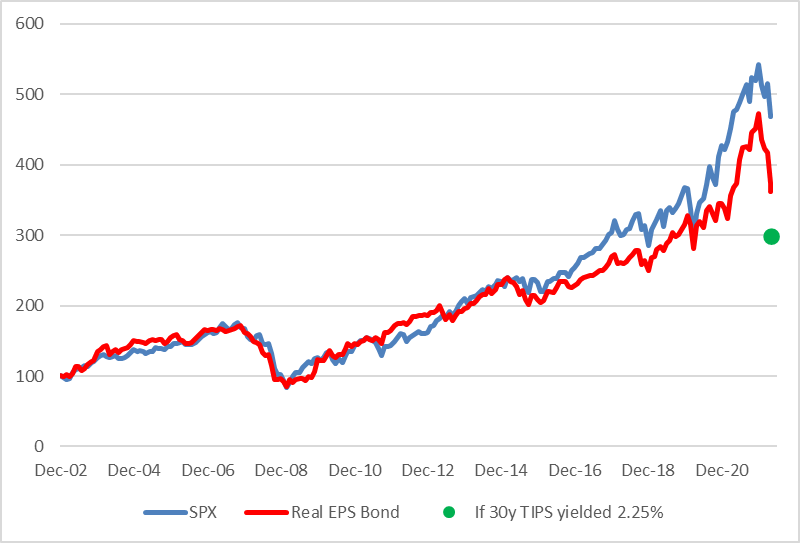 Don’t use this as a model of fair value: to be sure, the construct is a mite circular since part of the discount rate for my made-up bond is the current earnings yield, which of course needs the current price of the SPX. But for my illustration, it isn’t important that this is a strictly precise measure of fair value, but only that it describes the direction and approximate magnitude of the changes in fair value, because what I want to look at is the effect of changes in real interest rates on the value of the stock market.

With that large caveat out of the way, you can see that the recent decline in the equity market is along the lines of, though not as severe as, the move that the rise in 30-year real interest rates would imply. So if you are thinking that this selloff is overdone, you might be better off buying long-dated TIPS than buying equities.

On the other hand, if this is a return to a long-run equilibrium—which we haven’t seen in many years, at least since the Fed started flushing massive amounts of liquidity into the market and economy during the global financial crisis (GFC)—then a significant additional decline could be coming. The green dot is where the model’s level would be, if 30Y TIPS were really at something like the long-term equilibrium level of 2.25% or so. (For the record, the average month-end yield of 30Y TIPS from 2002-2007 was 2.31%, and there are good reasons why this yield should be in the vicinity of the long-run real growth potential of the economy.)

The green dot would imply another 17% decline—although keep in mind this isn’t something that will happen right away, but as real yields gradually rise.

My first conclusion then is that the decline in the stock market so far is eminently reasonable and, unless you think that real yields are about to decline again markedly, or that a big (not currently discounted) surge in growth is coming, it’s hard to make a strong case for an aggressive stock market rally.

A related point regarding . Because not only are stocks vulnerable to a decline as (and if! Don’t forget if!) real interest rates return to an equilibrium level, it is important to realize the effect very low interest rates have on volatility itself. This goes back to fixed-income mathematics: the lower the yield, the longer the duration of a given bond because the terminal cash flow becomes more and more important both because its present value increases (lower interest rates mean less discounting of distant cash flows) and because that terminal cash flow becomes a larger proportion of total cash flows when coupons decline.

Here is what the modified duration of 30-year TIPS has done in the last two decades as interest rates have declined. TIPS today are 33% more volatile than they were in 2002. 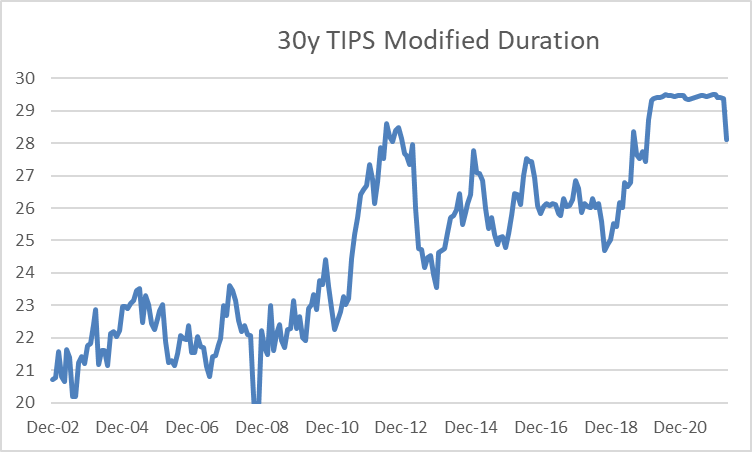 The coming week brings the latest favorite-son of the data-watching crowd: . The consensus estimate for is +0.4%, and for only +0.2%, and the year/year numbers will drop sharply to what I predict will be great fanfare.

It is very likely that we have seen the high in CPI for this year, and possibly for the cycle. But as I noted last week, there is tremendous “potential energy” in the amount of money still sloshing around the economy. Y/Y CPI will drop for mechanical reasons, because we are coming off some extremely high figures from a year ago.

I am not so sanguine that the monthly core inflation numbers will be as tame as the consensus projects, though. You get no surprises from the forecast that Used Car inflation will decline, both for base effects and because the actual price of used cars has declined a little bit from the highs. 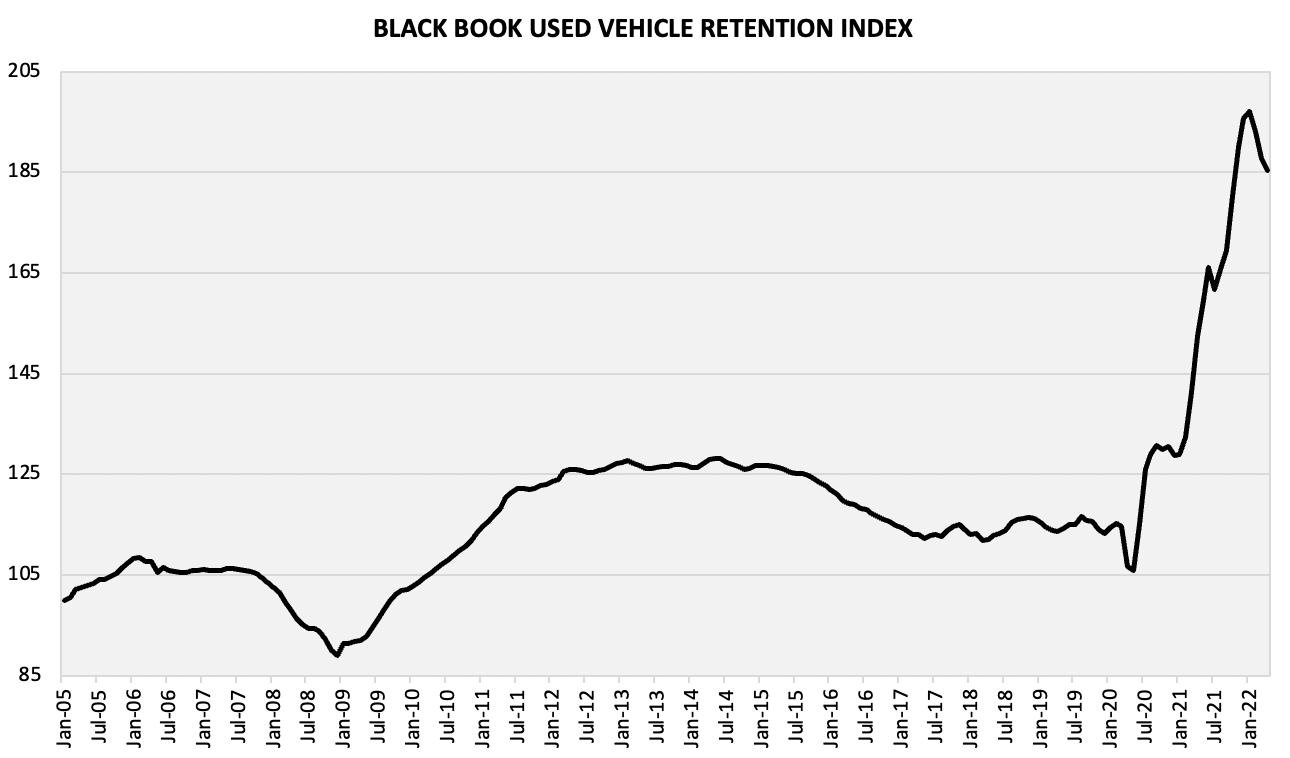 Beyond used cars, there may be some mild deceleration in core goods inflation. The ’s strength will eventually translate into lower goods inflation, although I am not sure we will be seeing an impact yet. However, it is very difficult to get excited about these things when rent inflation continues to accelerate and that is the 500-pound gorilla in the report.

Moreover, inflation continues to be very broad. It was never just about Used Car CPI, and it isn’t just about Used Car CPI now. The price of everything is rising. If the inflationary impulse is waning, the place to look is not at the change in the year/year rate. The place to look is in the proportion of the consumption basket that is inflating rapidly, and that’s where my focus will be.

Metsola: This is the moment to answer Europe’s call | News