Defensive stocks should continue to outperform as investors attempt to avoid multiple growth headwinds. Our expectation is for the technology sector selloff to endure even as demand for defensive shares—which tend to be more stable during times of uncertainty and escalating inflation—accelerates.

On Thursday, ahead of the Good Friday holiday, most sectors finished the shortened trading week in the red. Except for ‘s 0.33% boost,  was the only other gainer, and just barely at that, +0.05%.

shares lost 2.43%, as investors, made jittery by recent market turbulence, looked to preserve capital rather than opt for growth, as fear continues to outweigh greed. Tech’s sibling, , lost 1.7%, making it the second worst performer for the day.

Even , a classic defensive sector, slipped into the red, indicating just how skittish markets have become, though the sector finished barely lower, down 0.03%. , not a classic defensive sector, fell only 0.11%. Russia’s aggressive moves against Ukraine have been a catalyst both for the strong rise in energy shares on fears of supply disruptions and a signal that global commerce may require restructuring, including rebuilding manufacturing plants and reconfiguring shipping routes, which therefore also held stocks in check; the sector dipped ‘only’ 0.34%.

The same paradigm is echoed in the weekly view. Tech stocks underperformed, -5.13%, followed by Communication Services which showed a 2.78% decline for the week. Only three sectors gained on a weekly basis: Consumer Staples was + 0.57%; Materials which rallied 1.27% and Energy stocks, which led, up 3.17% for the week. Though Utilities were down 0.8% for the week, it was a decent performance relative to the -2.39% weekly S&P 500 selloff.

Even over the past six months Energy shares have been the outperformers, up nearly 40%, with Utilities climbing 15.5% to take second place, followed by Consumer Staples, +11.07%, and Materials’ 6.15% rise over the period.

At this stage, even the yearly view isn’t particularly positive for Tech shares, which gained just 4% over the past 12 months. Not surprising, given oil’s strong moves, Energy’s + 62.33% made it far and away the sector outperformer on a yearly basis, but Materials was also among the leaders. Communication Services shares plunged 12.43% during this timeframe.

Only in the five-year view, which includes the pandemic lockdowns, is the old normal for Technology still visible—during this broader timespan the sector added 180%.

The Federal Reserve’s drastic about-face from its initial view that was just transitory to its current, more hawkish stance, has ratcheted up tensions on Wall Street. Several big banks have been warning that could choke off growth, which is already challenged by the global health crisis, made worse by a worldwide supply shortage, topped off by the first major European war since WW2 which could get even more dangerous after Moscow openly threatened nuclear war for the first time ever.

Some analysts, however, believe the US central bank ignored clearly rising costs for months before stepping in too late to tame inflation. This argument says the Fed will chase inflation rather than get out ahead of it. In this scenario, rate increases will lag faster, accelerating inflation, instead of stopping it in its tracks.

Financial market sentiment can be challenging to grasp. But, times like these could leave even seasoned investors scratching their heads, at a loss for which negative interpretation to follow in order to readjust portfolios accordingly.

This lack of leadership is probably why markets have recently not made sense to many. Stocks and bonds—which tend to represent two oppositional parts of the economic cycle—have been falling in unison.

The inversion has corrected, albeit just slightly; US yields closed Thursday above 2.8%, for the first time since 2018, an ominous warning for equity investors since rising yields reflect bets of escalating interest rates.

Indeed, the Treasury yield is a self-fulfilled prophecy, as it forces the Fed to keep up. More expensive money makes stocks more expensive, and the higher bond payouts compete with expected equities returns and dividend yields. 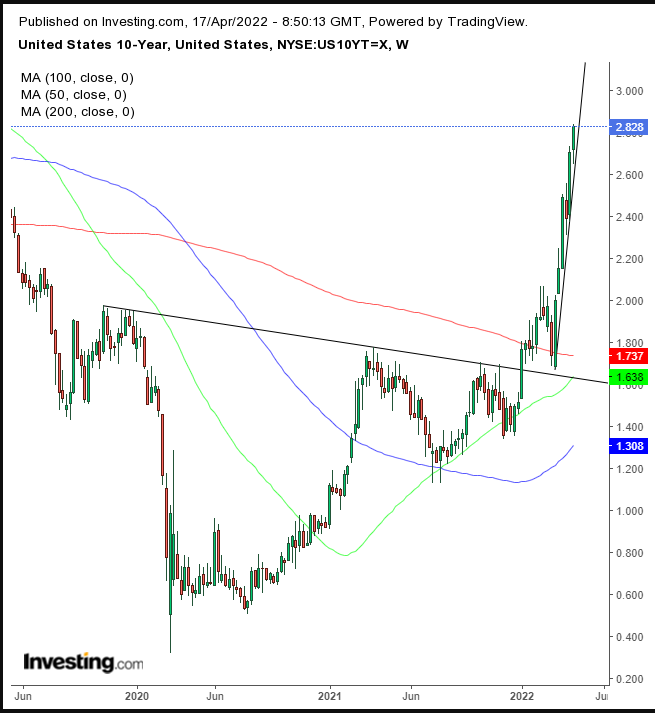 Yields completed a large H&S bottom, whose neckline was reinforced by the 200-week MA. The 50 WMA, which already crossed the 100 WMA, is gaining on the 200 WMA, for a weekly golden cross—the first time since 2017. Yields could carry on another 45% after that cross.

However, that was when rates were moving mostly sideways since 2008. This weekly Golden Cross comes after a sharp decline followed by a rebound, making the signal’s potential meaning far more potent.

When JNJ reports on Tuesday, Apr. 19 ahead of the open, analysts are forecasting $2.59 EPS, precisely the same as the last year, on $23.69 billion in revenue, higher than the $22.32 billion expected for last year’s corresponding quarter. 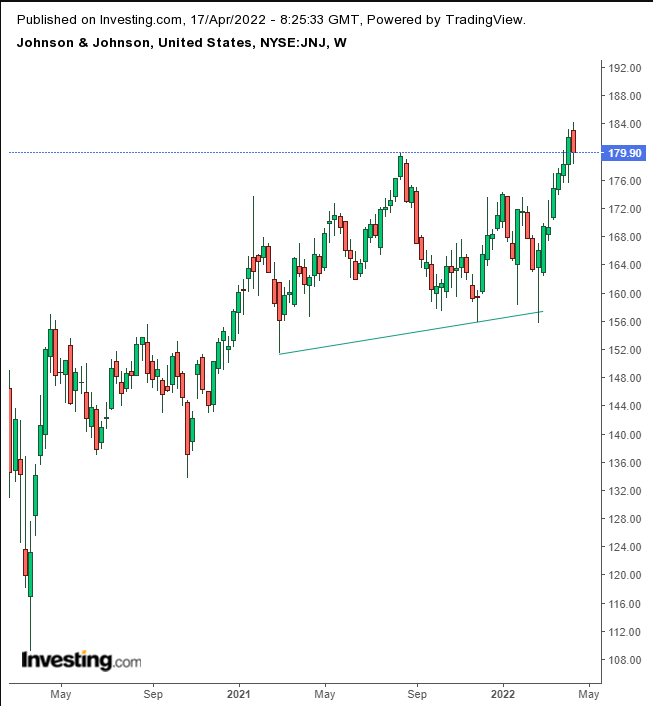 The company’s stock has blown out a large H&S top, in play for more than a year. Last week’s trading found support at the August peak, confirming the sentiment reversal.

Procter & Gamble is scheduled to post earnings the following day, on Wednesday Apr. 20 ahead of the open. The consensus view is for $1.3 EPS on $18.72 billion in revenue, compared to the last year, when it showed a $1.26 EPS and an $18.11 billion revenue. 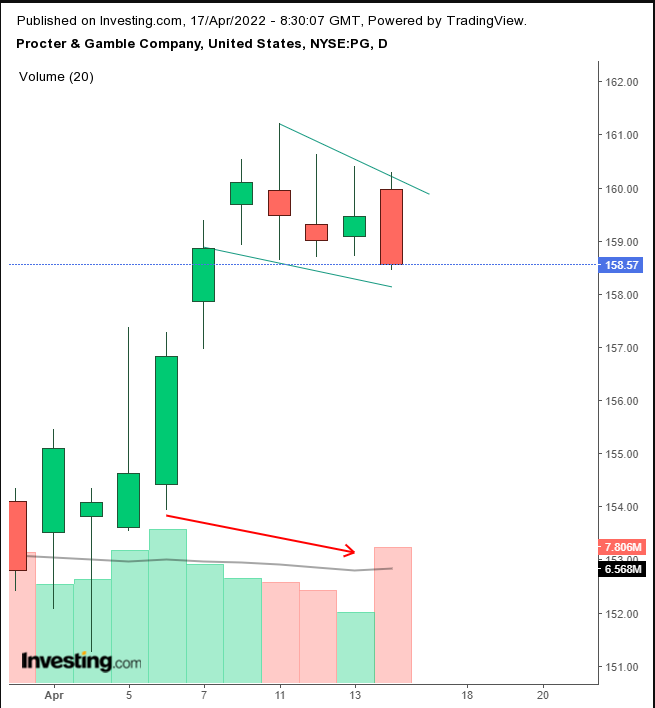 PG seems to be testing the bottom of a rising flag, bullish after the initial plunge, abandoned by participation, reflected by diminishing volume.

Other notable names coming up on the earnings track are Netflix (NASDAQ:) and Tesla (NASDAQ:).

However, CEO Elon Musk just lost a critical ruling after a federal judge decided that Musk’s infamous tweet about going private in 2018 was false, opening the company to potentially severe lawsuits. 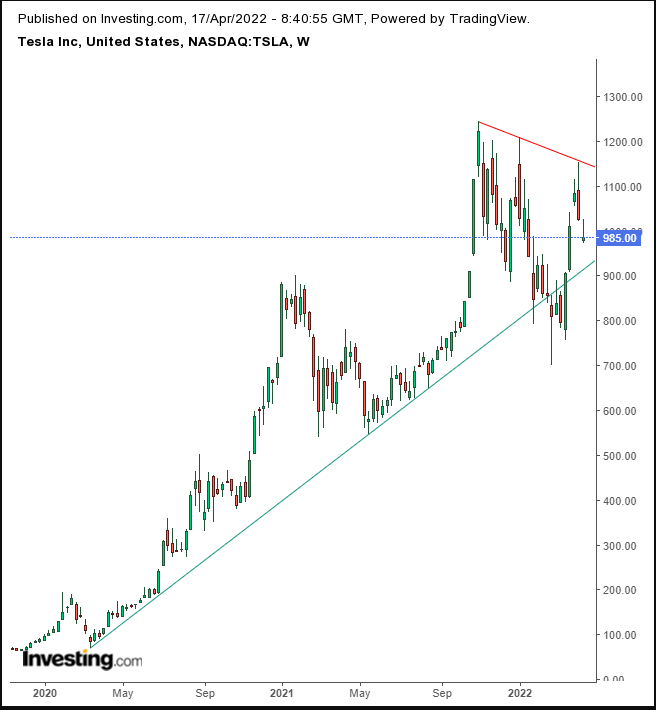 TSLA has been unable to extend its uptrend. Another descent below the February low of precisely $700 will establish a long-term downtrend for the stock.

The has been tracking yields higher. It closed flat on Friday at Thursday’s 100.32 close, the highest level for the greenback since May 2020. 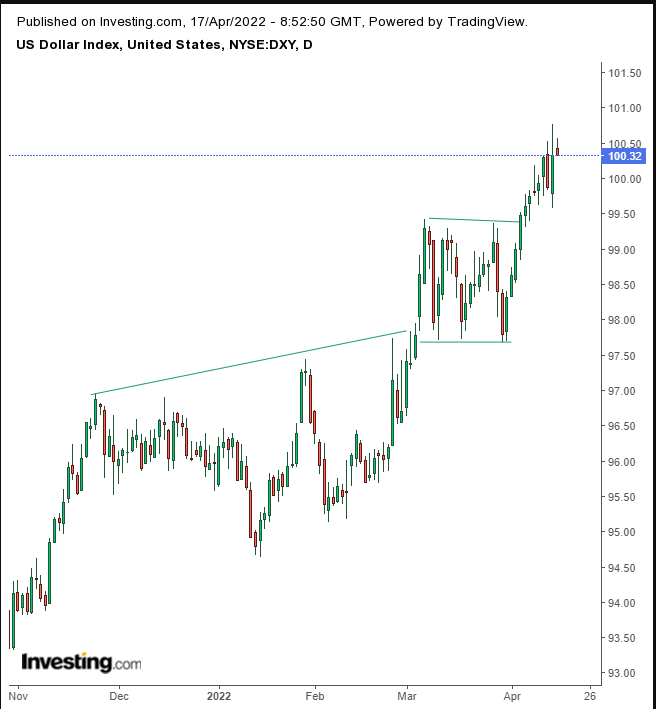 The dollar has been struggling at the same level for four sessions, as continued buying offsets a return move to the range that followed the H&S Continuation Pattern.

retreated at the end of the week, halting a five-day rally.

After it dropped on Monday, has been little changed. 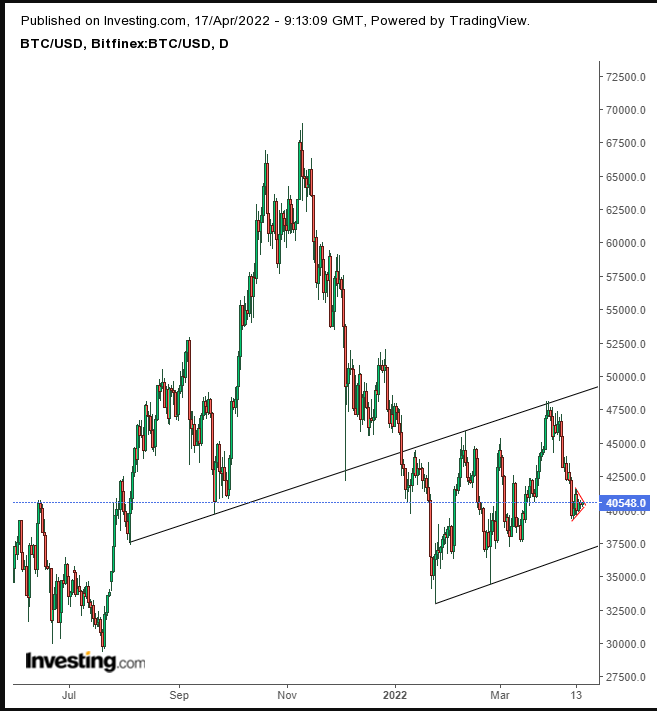 The cryptocurrency is forming a bearish pennant that may retest the uptrend line. If the price falls through it, however, that will signal the digital token is ready to test the $30K level.

jumped on a report that the EU is withdrawing from purchasing Russian oil because of the war. 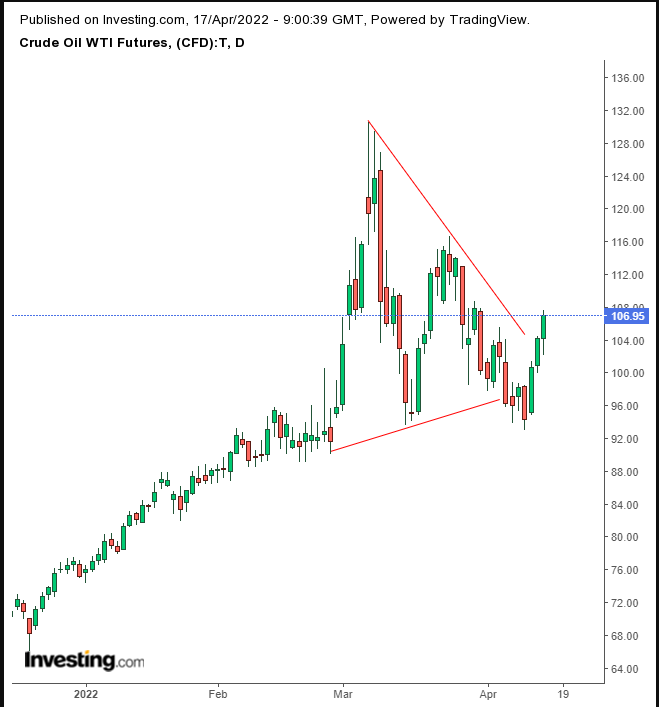 It’s unclear whether WTI’s trading pattern is coherent. If we’ve drawn our trendlines correctly, the price ran through the vertex of the triangle, which renders the pattern—and all its dynamics—moot.

University to Pay $400,000 to Professor Punished for Refusing to Use Student’s Preferred Pronouns