Traders will have plenty to grapple with during the week ahead as an array of varied and complex drivers are likely to impact markets in potentially conflicting ways.

Even as the Russian attack on Ukraine continues, the US’s much followed March employment report will be released on Friday. If it shows tight labor conditions, bets will increase that the next Fed will be a half-percent. Total employment will create upward pressure on , as employers continue to vie for workers.

Higher salaries would also increase demand, driving up costs even after US has reached a more than four-decade high. Another current inflationary trigger, oil prices—which have been rising—could further accelerate inflation. The price of oil is already at the highest level since April 2011 and just 0.04% below the most elevated levels since 2008.

If the price of crude does challenge that record, as some predict, the Fed will almost certainly be forced to keep raising interest rates. The impact of higher crude won’t only impact commuter costs, American industry relies on oil for manufacturing and transportation of its products. Thus, when the price of oil rises so does the cost of a plethora of other goods.

Adding to investor worries, inflation was already on the rise in the aftermath of COVID. Costs of products manufactured internationally escalated worldwide when commercial routes became bottlenecked. Now, even as lockdown restrictions are easing, newly instituted sanctions against Russia, and a retaliatory counter ban put in place by President Vladimir Putin on exports of commodities and raw materials from Russia, could drive costs even higher.

On Friday, US markets finished with a choppy session to close out the week. Most indices gained when dip buyers came out in force.

The rose 0.51% for the day. outperformed, adding 2.19% in value Friday, tracking volatile oil prices. The second-best performer for the day was , +1.45%. Since the beginning of the Russia–Ukraine crisis, this defensive sector has been providing superior results. The remaining cyclical sectors were more than a full percentage point lower than Energy. and were the only sectors in the red on Friday.

On the final day of last week’s trade the advanced 0.44%. Conversely, the and both finished lower, just under 0.1% each. After the virus’s first wave those two sectors were on opposite sides of the cyclical rotation, but since the Fed turned more hawkish, they’ve generally moved in tandem. 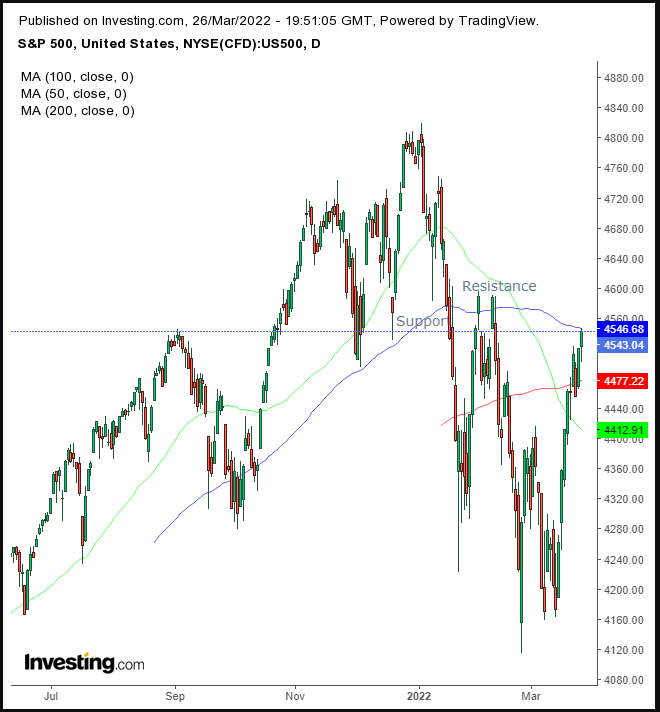 The broad US benchmark rose to its highest level since the Feb. 9 peak on Friday, stopping at the resistance of the 100 DMA. The S&P 500 previously crossed above the 50 and 200 DMAs—a bullish move.

On the other hand, the recent crossing of the 50 DMA below the 200 DMA, which triggered a Death Cross, is decidedly bearish demonstrating how confused traders actually are. Note that the 4500-level where the price closed for the week is a support and resistance area. Given that traders locked in this position for the weekend is more significant than a daily close at the same level.

Yields—including for the note—topped the 2% mark last week. The yield on the Treasury benchmark has now achieved our initial target and is halfway to our secondary target, around 3%.

The closed flat on Friday but moved higher for the week, extending its rally to the fourth out of five weeks. 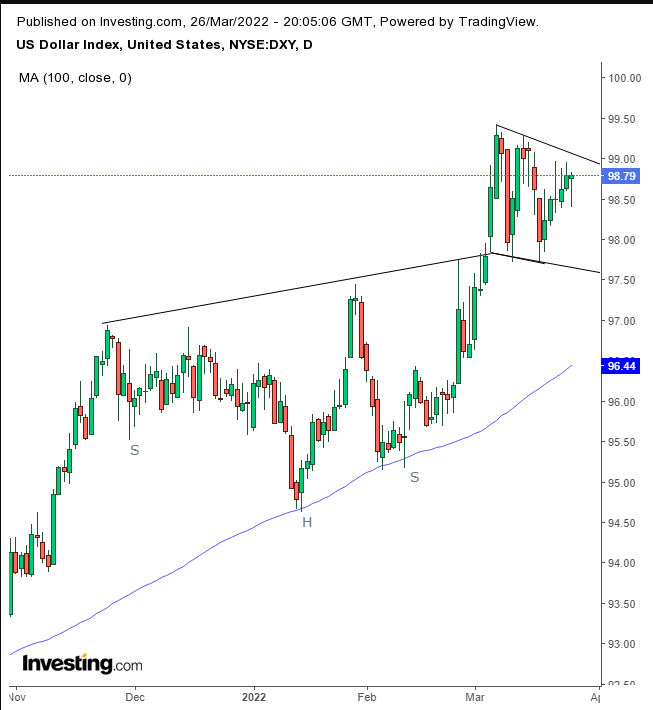 The greenback continued to trade in a slightly down-sloping range, presumably a falling flag, bullish after the H&S continuation pattern.

Sharply rising Treasury yields suggest investors are preparing for higher interest rates, which may prove to be a self-fulfilled prophecy. Given that yields possess a negative correlation with equities, we predict that the S&P 500 and Dow Jones will soon join the and the Russell 2000 in a bear market. 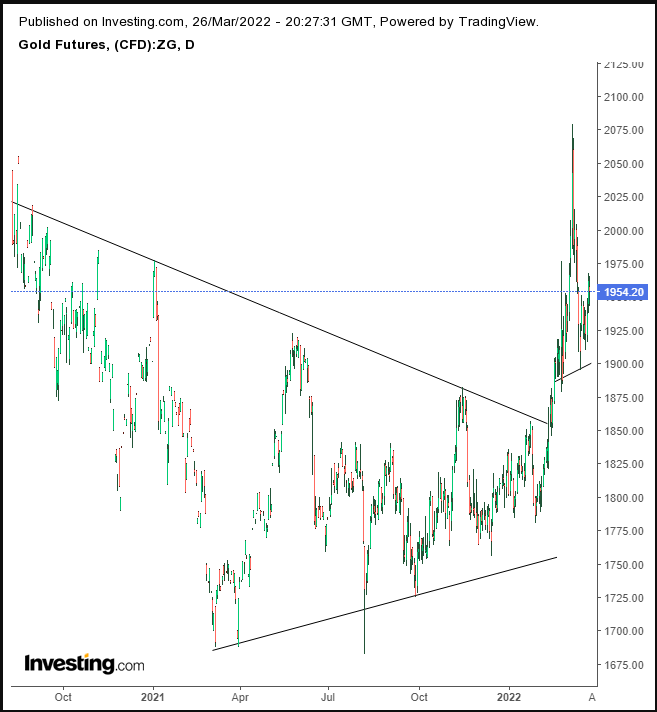 Precious metal bulls and bears have been duking it out as the yellow metal developed a six-week H&S top after completing an 18-month bullish Symmetrical Triangle, whose implied target was realized.

rose on Saturday for a fifth straight day, pushing toward the $45,000 mark for the first time since Jan. 4. Crypto marketplace rumor suggests the Foundation, which focuses on stablecoin , is accumulating the leading digital token as an additional layer of security for its dollar-pegged cryptocurrency. 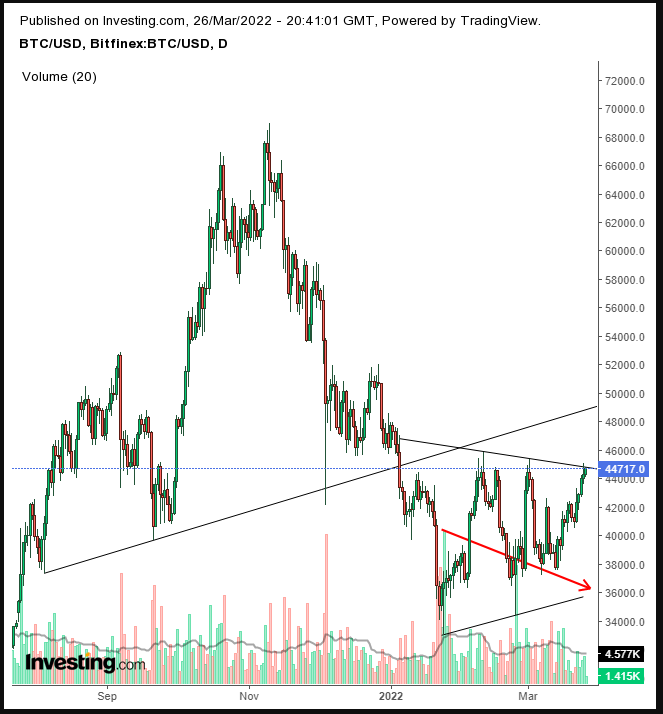 However, despite the fundamentals, the price of BTC came to a dead-stop precisely below the top of a Symmetrical Triangle, considered bearish after the H&S top. Note that the resistance is below the neckline of the reversal pattern. Volume has also been receding amid the current pattern’s development. Therefore, despite the positive news, we maintain our months-long bearish stance.

Another possible fundamental driver for Bitcoin’s current ascent: Russia could become another country to widely use Bitcoin as legal tender, as they consider accepting it for export payments.

surged 8.79% for the week, trimming most of a two-week decline. 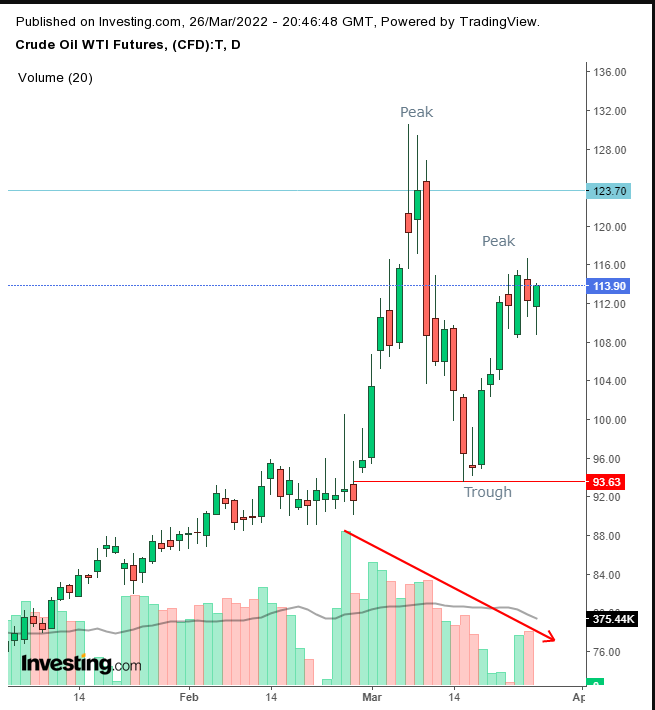 Technically, the rally during the last month was on diminishing volume, suggesting weakening demand. A fall below $93.63 a barrel will establish a downtrend.

Remarks by Vice Chair for Supervision Barr on financial inclusion

Apple Q1 Report: How Would Graham Read It? (NASDAQ:AAPL)