Equity bulls are waiting anxiously for the expected increase this coming week from the US Federal Reserve along with additional hoped for insight into the central bank’s on monetary tightening in order to tame spiking .

Last week we wrote that hopes for getting the market ‘back on track’ were riding on strong earnings results from marquee mega-cap tech giants which all reported last week. We posited, correctly it turned out, that wouldn’t occur since in our view the crux of the matter is the highest inflation in four decades and the fastest tightening rate since 2006. As such, earnings, even if they beat, are beside the point.

And indeed, on Friday, all four major US indices—the , , and —finished significantly lower to close out a week. The tech-heavy underperformed among US benchmarks, dropping 4.47%, with the SPX following, down 3.63% pressured by the technology sector. It was the broad index’s most significant single-day decline since June 2020.

The S&P 500 rout extended as April came to a close, making it the worst month for the SPX since the pandemic began. The NASDAQ saw its worst monthly performance in April since the 2008 financial crisis.

The selloffs were triggered by underwhelming guidance from the tech giants. Amazon (NASDAQ:) lost 14% of value on Friday after its , released Thursday after the close, showed that the company’s eCommerce revenue dropped 3% for the quarter, underscoring that the Seattle-based company’s recent hiring and warehouse building push has added unnecessary expenses as sales growth slows.

Based on S&P sector comparisons, it’s clear that inflation and interest rates remained the dominant themes on Friday.

was the third worst performer, mirroring the NASDAQ Composite’s performance on Friday. , a tech adjunct, followed right behind. However, shares—non-essentials goods and services, which suffer when consumers tighten their purse strings—were the leaders among the losers, plunging 5.08%.

The sector was the second-worst performer on Friday, with a 4.82% slump. This would seem like an anomaly, however, in a rising inflation environment. Investors have long considered the real estate sector an inflation hedge, since it tends to rise along with higher prices. However, that’s not necessarily the case when the jump in housing is explosive.

For all the tech sector turmoil, on a weekly basis Technology was the second best performer, dropping just 1.16%. The week’s best and third best sector performers were which retreated just 0.83%, and , which slumped 1.38%. Given that these last two are cyclicals, value sectors negatively correlated with tech growth stocks, the weekly performance comparison isn’t a useful gauge since value sectors tend to escalate amid economic acceleration, siphoning investments away from growth shares.

Of interest, with the NASDAQ 100 dropping 13.5% on a monthly basis, making it the worst performing major index followed by the inflation-sensitive Russell 2000 whose smaller, domestic firms are at a disadvantage compared to large caps and multinationals when it comes to weathering higher borrowing costs. The small-cap gauge fell 2.81% on Friday, 4.07% for the week, and 9.95% for the month.

These two indices are also the only major benchmarks currently in a bear market. 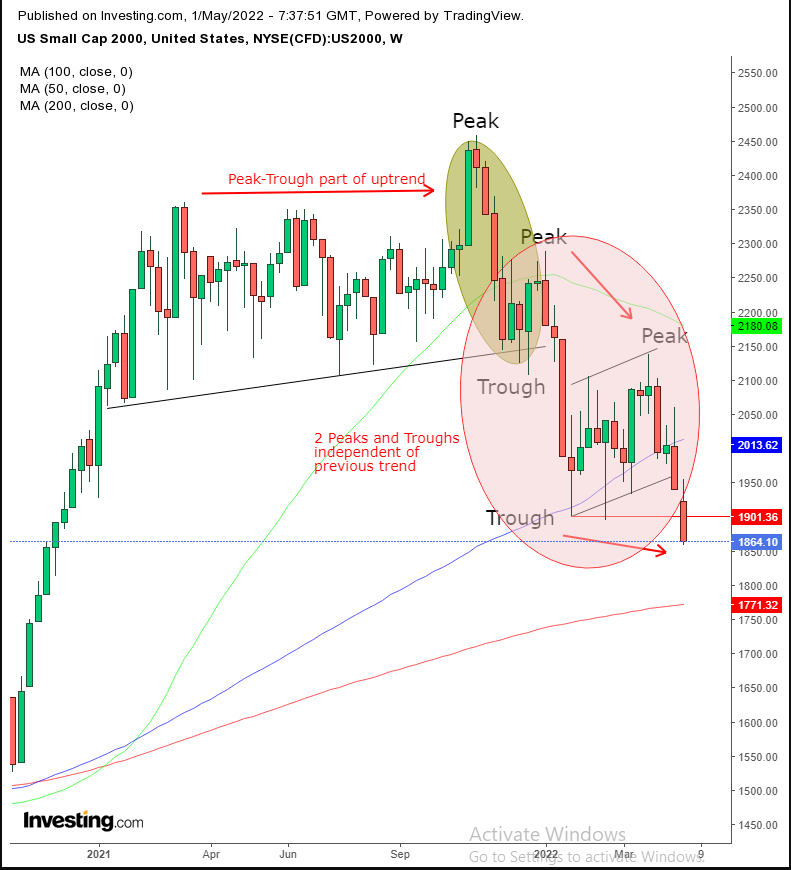 The RUT extended its long-term downtrend by registering a new trough, satisfying even purist technicians demanding to see a series of descending peaks and troughs independent of the previous trend. 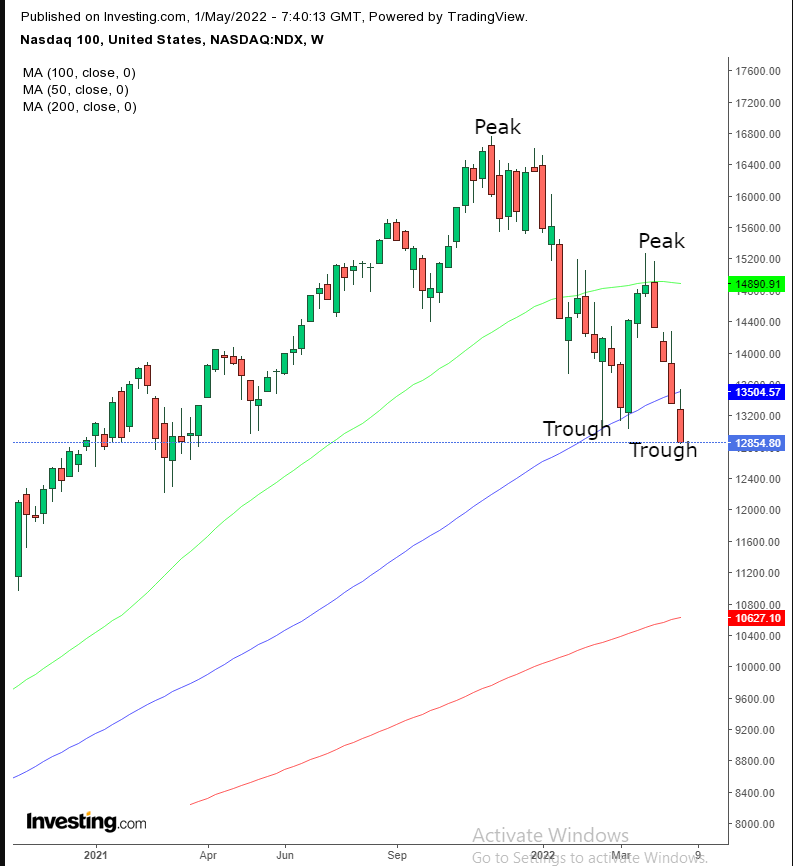 The index has established the minimum requirement for a downtrend, two descending peaks, and troughs. However, conservative analysts would prefer to see an additional set of peaks and troughs, independent of the preceding uptrend.

The Dow Jones, though it outperformed for the week and month, falling 2.47% and 5.09% respectively, lags its peers in one technical aspect— it tumbled for the fifth straight week, while the others are down for just four weeks. Nevertheless, the Dow is 10.38% lower than its Jan. 3 peak, putting it barely in correction territory, its weakest showing since Mar. 23, 2021.

Will bulls get some respite from this week’s Fed meeting? We argued in last week’s post that the earliest indication of whether inflation might be peaking, as some claim, will be visible upon the release of Friday’s data, the Fed’s favored measure. But the results turned out to be complicated. The headline number surged 6.6% annually as of the end of March, the fastest rate of inflation since 1982, a fresh 40-year high. That’s the bad news.

The good news, however, is in the details. Most of the gains were due to skyrocketing energy prices at the start of Russia’s late February invasion of Ukraine, which also caused a spike in food costs. However, after volatile energy and food prices were removed, the was a more tempered 5.2% for the same period. Moreover, when considering the monthly pace, this core measure, a preferred view of the Fed’s, was smoothed by removal of the volatile items, thereby better representing the trend which increased by 0.3%, slightly lower than last month’s climb.

Equity bulls may hang now hang their hopes on that hint of moderation that could allow policymakers to step back on aggressive hiking, the prospect of which has been making markets jittery. We’re not so sure those sentiments are realistic.

increased significantly in early 2022 as shoppers shrugged off high and rising inflation and leaned on savings to boost spending. That’s a spigot that could shut down if prices continue to increase, as consumers run out of funds amid spiking costs. Finally, the monthly PCE jumped the most in 16-and-a-half years, providing Fed members a potential excuse not to raise rates by a hefty 50 basis points this week.

Yields on the US Treasury surged after Friday’s inflation data was released, demonstrating again that investors do not, in fact, think that inflation is peaking. Yields advanced 6.5 basis points to 2.938%, scratching the 2.94% peak of Apr. 19, the highest since Dec. 3, 2018. 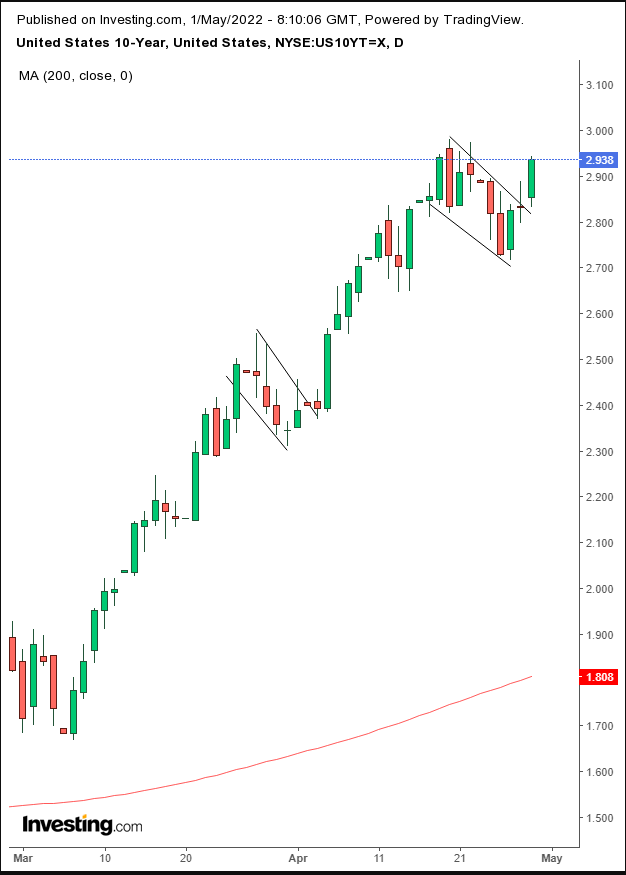 Rates may have completed a bullish flag, following a 6-basis point jump from a possible previous flag, completed in early April. The yield climbed for the fourth straight week, for the seventh out of eight weeks, to the highest weekly close since the week beginning Nov. 26, 2018.

However, the eased on Friday, giving up early gains to close below Thursday’s opening price, completing a Bearish Engulfing pattern. 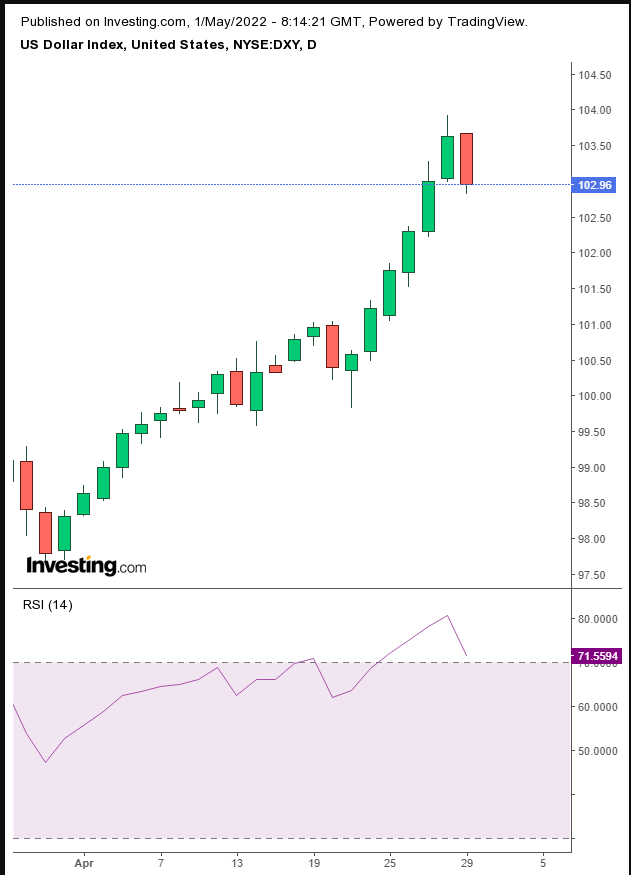 This pattern is a two-day trading structure, visually displaying a failed bullish attempt and a bearish win. The fall comes after the RSI reached the extreme oversold condition of 83.5, the highest on the daily chart, showing data since January 2018. The Relative Strength Index catapulted after the greenback accelerated to its loftiest level since 2002.

This current market anomaly, , climbed Friday for the second day, despite expectations for the fastest Fed tightening since 2006. We believe this reflects investors’ lack of faith in the central bank’s ability to get out ahead of the current raging inflation. 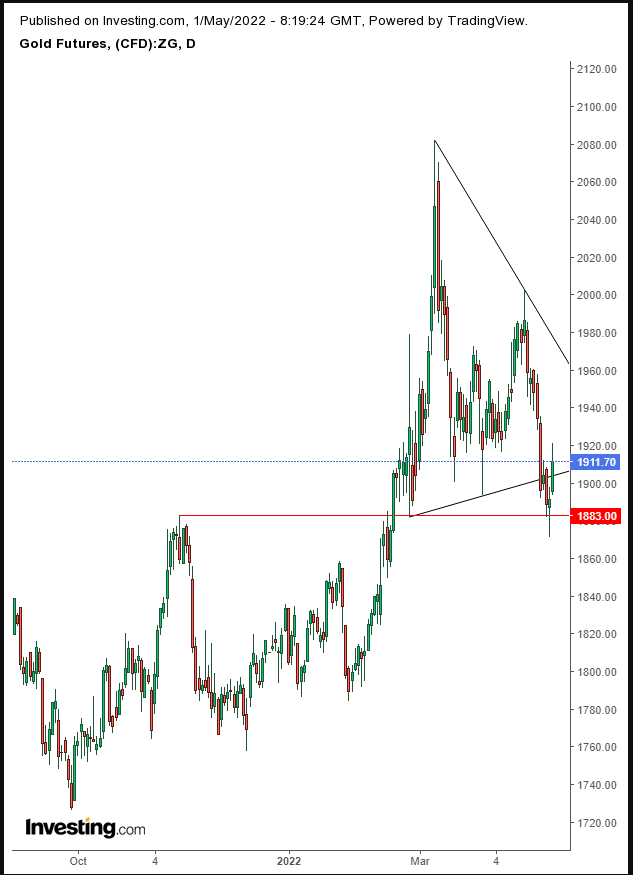 The precious metal found support at the Nov. 16 high and climbed back into a triangle. However, the price may resist the pattern and return to a selloff. A fall below the Apr. 28 low would solidify that outlook. But, if the commodity escalates above the 1,920 level, it may yet break the top side of the triangle, suggesting a continued uptrend that retests the yellow metal’s Aug. 2020 record peak.

rebounded on Sunday after a two-day selloff. 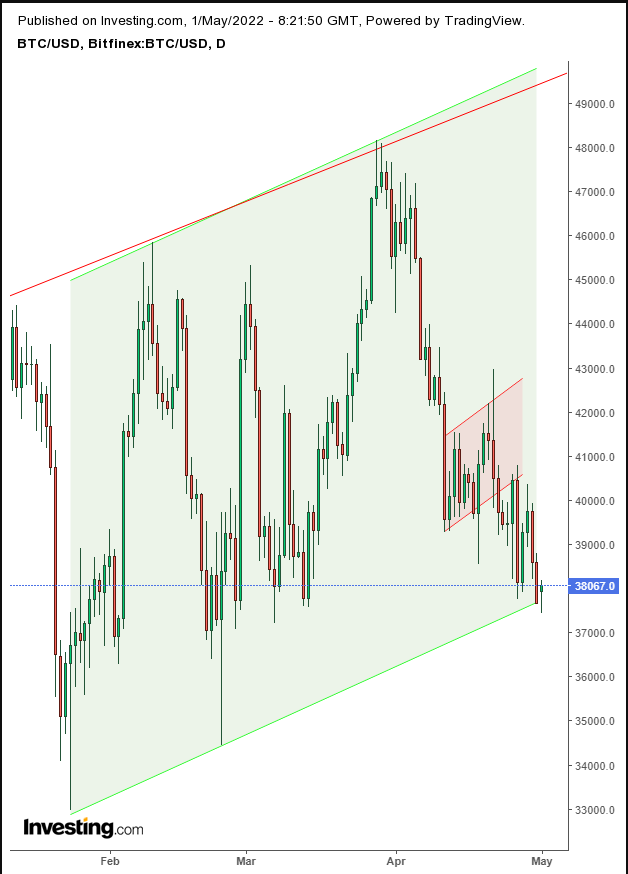 The selloff occurred after a second return move to a rising flag, bearish after the preceding sharp move lower. However, the cryptocurrency has now found support at the bottom of the rising channel. If traders maintain the path set out by the bearish flag, they should breach the rising channel bottom, putting the token back on course for a $30K test.

prices continued to fluctuate as Europe tries to wean itself off Russian oil. 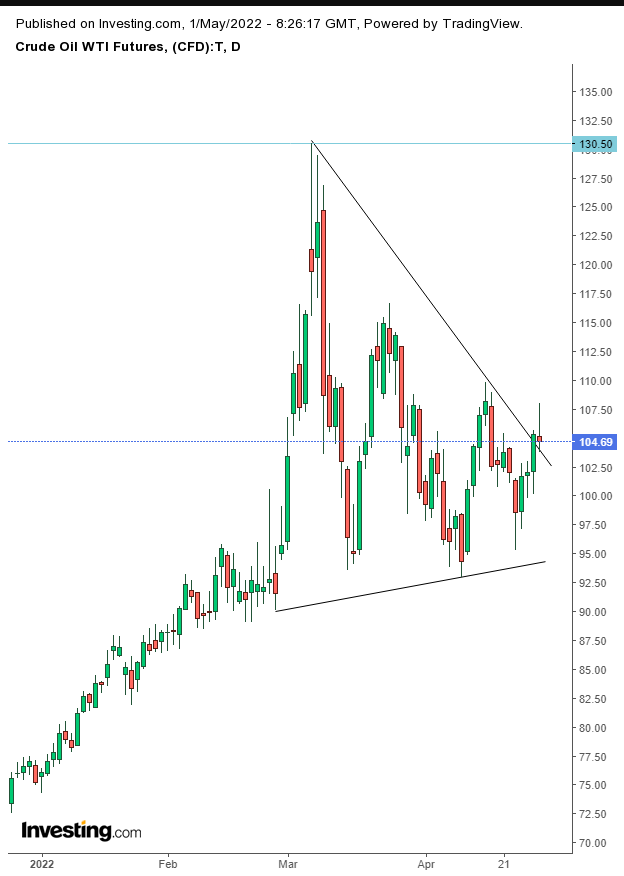 WTI closed above a triangle. Still, prices fell off their highs and closed lower, forming a cross between a Shooting Star and a High Wave candle. Either pattern raises the possibility of a retreat. However, if the price can break the 108.00 level, preferably the 111.00 for conservative traders, it will signal a retest of the March peak, the highest level for the energy commodity since 2008, 11% from its July 2008 record close.

Markets closed for the Labor Day holiday in the UK, China, and Russia

Markets are closed for Labor Day in China, Constitution Day in Japan

Markets closed in China for Labor Day, closed in Japan for Greenery Day

Markets are closed in Japan, South Korea for Children’s Day

‘You still have the chance’

Apple: A Value Stock With A Growth Stock Valuation (NASDAQ:AAPL)