We Have Seen Peak U.S. CPI, But Not Peak Inflation Pressures


For starters, let’s make sure everyone is on the same page. The report last week establishes (as expected) that the prior report that pegged CPI at 8.5% is likely ‘Peak CPI’ for this cycle. But this does not mean that prices are going to decline. Peak CPI means that the rate of increase will slow, but if you are waiting for new car prices to go back down, you will be waiting a long time.

Speaking of cars… Remember how the spike in used car prices was due to one-off disasters, the inability to buy new cars, the shortage in supply coming from rental fleets in 2021, etcetera, so much so that in some cases used cars were costing as much as new cars? And remember how we heard that this was ridiculous, so used car prices would have to decline when the “supply chain constraints” were solved?

Well, guess what. That incongruity is being resolved, but it’s being resolved by new car prices rising, not by used car prices declining. Which, actually, is what you naturally would expect if you noticed that the amount of money in circulation was 40% higher now than at the end of 2019, so all prices ought to end up averaging about 40% higher ceteris paribus. 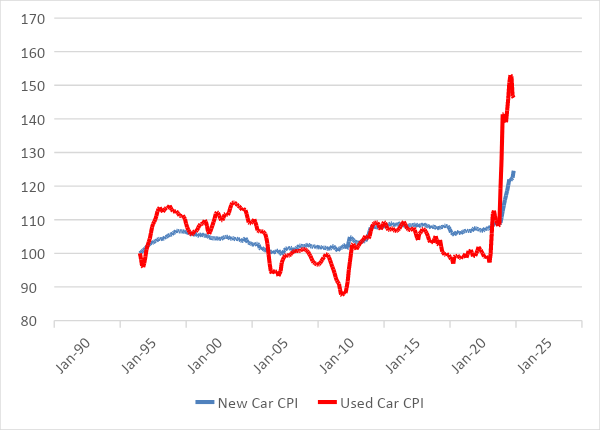 This week, we are going to get bunches of housing data. Home prices, too, shot higher in the aftermath of COVID; home prices, too, are supposed to stop going up so much and perhaps fall, thanks to rising mortgage rates which impact affordability.

Rising mortgage rates definitely is impacting foot traffic from first-time home buyers and speculative buyers. But those are the more price-sensitive buyers. I fully expect that we will see volumes of home sales declining. But while home prices won’t keep rising at 20% per year, there’s still a big shortage of them and the people still shopping for homes are the more price-inelastic demand. Watch especially the y/y change in the median price. It hasn’t been less than 12.6% in a couple of years and was last at 15%. It should decelerate, but only slowly.

Part of the reason that people are excitedly chattering about ‘peak CPI’ is that it allows forecasters to start focusing on how quickly inflation will fall back to the Fed’s target. And it seems that forecasters are very enthusiastic in forecasting this deceleration, with some even saying that the rate of inflation over the last three months of 2022 may be right about at the Fed’s target, in the low 2s.

I am intrigued at the fetishism around 2%. Somehow, the fact that the Fed wants inflation at 2% has morphed into a belief that somehow, 2% is the natural equilibrium to which all inflation is pulled (in the absence of supply chain disruptions, or whatever other excuse seems handy). It isn’t at all clear to me why that would be the case; certainly, it has been a long time since monetary policy has been managed in a way that would produce such mean-reverting behavior. But even if it once was the case, I can’t think of a good reason why it must be the case now, all of a sudden. Rhetorically convenient, perhaps?

Wages are rising at 6%, and seem to be continuing to accelerate along with the underlying inflationary pressures (represented here by Median CPI). This doesn’t look like a system inherently out over its skis. It looks like a very regular system where inflation pressures are being passed along to wages, and probably vice-versa as well. 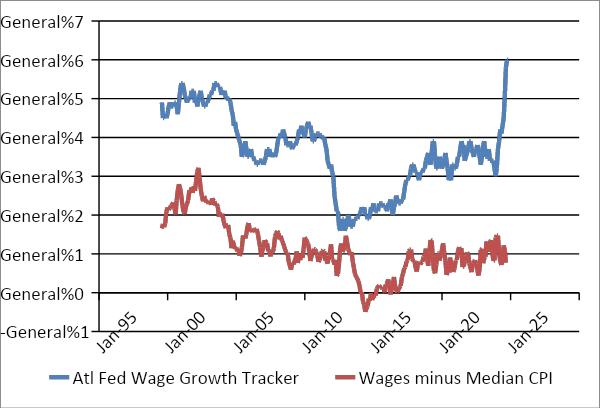 Moreover, while headline and have peaked (but not prices!) I don’t have the same confidence that is true of better measures of price pressures, such as the Median CPI. It’s still rising whether you look at the last 3 months, the last 6 months, or the last 12 months. 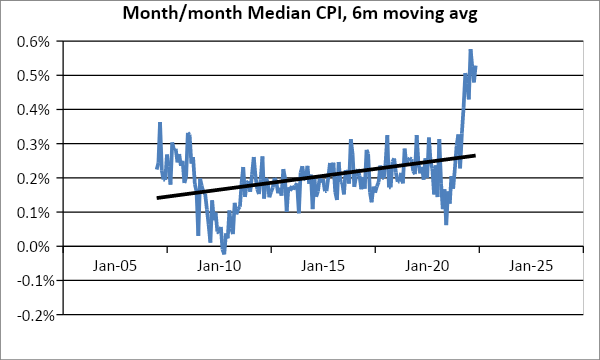 And there is no sign yet that the inflationary pressures in the CPI basket have stopped broadening. Below is a chart showing the proportion of the consumption basket where the year/year percent change is faster than 4%, 7%, and 10% respectively. A quarter of the consumption basket is inflating faster than 10% per year, including things like flour, rice, and pasta, just about any kind of meat, baby food, propane, major appliances, tools, mens’ suits, cars (new, used, or rented), and more! 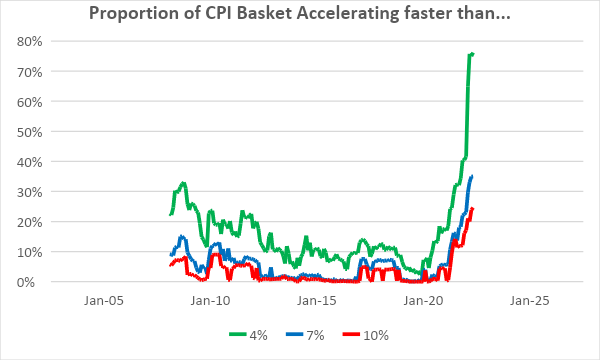 So, while we are past ‘peak CPI,’ I don’t know yet if we are past the peak inflation pressures. Forecasts that we will be cruising along at 2-3% by year-end seem, to me, to be wishful thinking.

End of an era? Penguins at crossroads after playoff exit

Apple Vs. Meta: Which Is The More Attractive Choice? (AAPL) (META)

Apple Stock’s Tough Year Should Be Bought On Weakness (NASDAQ:AAPL)

Apple: A Value Stock With A Growth Stock Valuation (NASDAQ:AAPL)