“All Nigel wanted to know was whether he was doing Dublin and Belfast,” Sky Sports’ darts producer Rory Hopkins said as he led the tributes to Nigel Pearson, who died aged 52 on Good Friday.

Pearson commentated as part of Sky Sports’ coverage of the darts for over 15 years since joining in 2006 and was also an experienced speedway presenter and commentator.

He was also a radio commentator and was part of talkSPORT from the launch of the station in 1995.

Pearson’s death has shocked everyone on the Sky Sports darts team, including producer Hopkins, who had known Pearson for over 20 years. 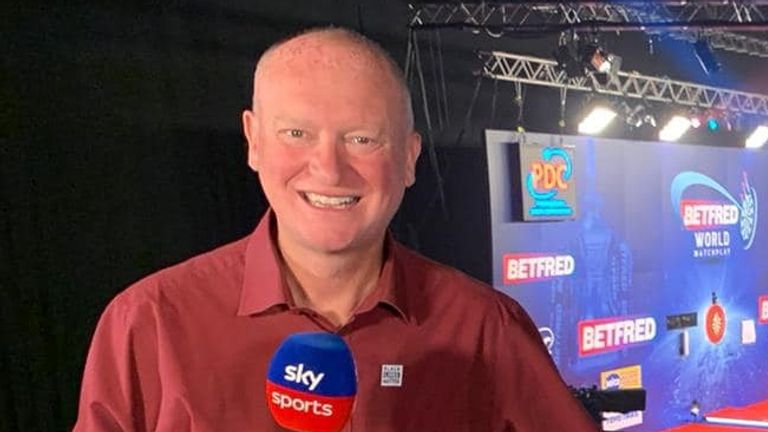 “He liked a pint and enjoyed reading the newspaper. He loved his job too”

“He was the British speedway press officer and although I never met him at the time I got him to do an interview. He was good so I put him on some commentary and it went from there,” Hopkins recalled.

“People think he’s good on darts, but listen to some of his speedway commentary and it’s just fantastic. He lit up the sport.

“Apart from Clarky (Dave Clark) he’s the one reporter, presenter that I would ring up for no reason at all and chat with.

“I reckon when he was a kid, all of us were kicking the ball around, and he would be standing there with a stick in his hand pretending to be a commentator. That was his real dream.

“He just loved sport, although speedway was definitely his first love.

“I’ve worked with some great combinations and Nigel and Kelvin (Tatum) made speedway so interesting and so good. He was great on darts, but he was the best on speedway.”

Hopkins joked Pearson could find an Irish bar in the Sahara desert, regaling a story from a trip to Scandinavia.

“We didn’t even know if there was a bar in town but Nigel would find one somehow. He liked a pint and enjoyed reading the newspaper. He loved his job too.” 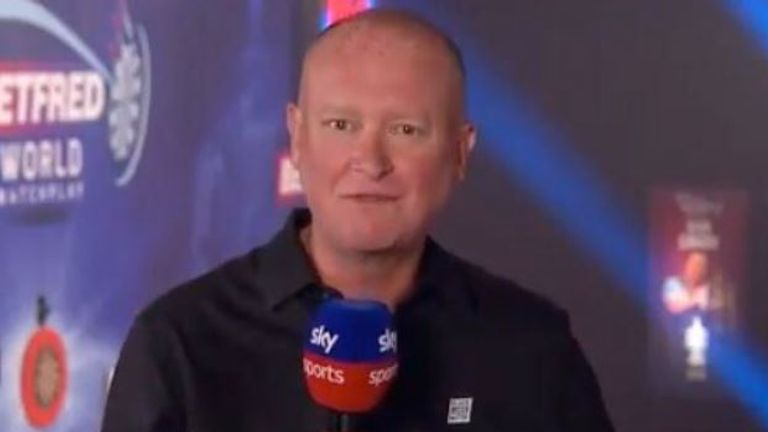 “Such sad news about Nigel Pearson or Nige to us all. Nige never had a bad word about anyone and you never heard anyone say anything but good things about Nige. Nigel came to Sky Sports over twenty years ago to join our Speedway team, it was his true love and he soon became our main commentator and presenter of the show. He then got moved on to darts as well, adding an energy and excitement to the sport. He was just a brilliant commentator. Lots of us when young dreamed of scoring the winning goal for England or smashing a century against the Aussies, I’m sure Nigel’s dream was to commentate on this happening. He loved commentating and he loved sport. When World Champions like Barney and Gerwyn Price are tweeting what a great guy Nigel was you know his cheeks would have puffed out with such pride to see those words. Nige was a great tourist, happy in the company of his team or just as happy on his own as long as there was a creamy pint of Guinness sitting in front of him.” 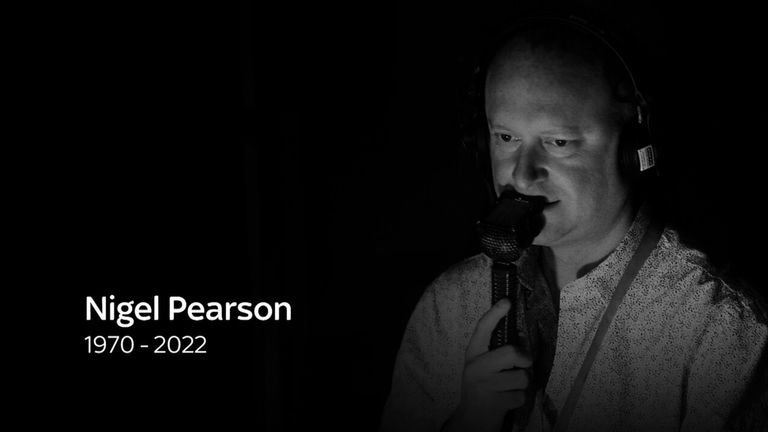 Tributes have been paid to Sky Sports commentator Nigel Pearson, who died at the age of 52

Tributes have been paid to Sky Sports commentator Nigel Pearson, who died at the age of 52

“Nigel loved sport, loved a Guinness and most of all loved his precious family. To die at the age of 52 is unthinkable,” said Clark.

“He was one of life’s good guys. It would be hard to find a warmer, more enthusiastic and friendlier person.

“He had an incredible talent to bring even the dullest of games to life with his high octane, staccato style commentary which he’d honed in the world’s of football and speedway. I was in awe of his work on Sky Sports speedway coverage.

“He would not only present the show with his sidekick Kelvin, but would then turn around on the scaffolding studio and somehow commentate on 60 seconds of motorsport mayhem on a 300-metre shale circuit. Nigel would perfectly encapsulate the exciting and breath-taking one minute of action around the speedway circuits of Britain and Europe. ‘No brakes, no gears no fears… oh my word there’s a punch-up in the pit-lane’ he’d scream.

“Speedway on Sky was the perfect television show, dramatic action packed in a short sharp show, Nigel held it all together, so brilliantly. It was television gold.” 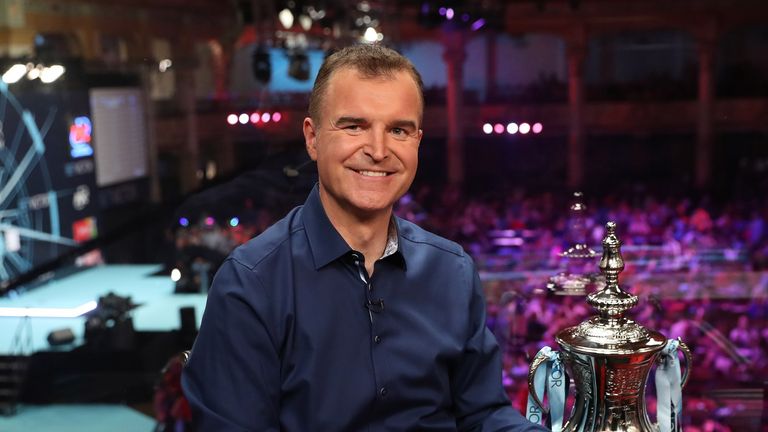 “I remember Sid and Nige calling in Raymond van Barneveld’s first nine-darter at the World Championship in 2009, a great moment for all concerned. Nigel was happy to play second fiddle, letting Sid dish out the punchline.

“It’s a real credit to his skills that Nigel was one of the most in-demand commentators around. He could turn his hand to pretty much anything. ‘What a life’, he would say, ‘I get paid to watch things I’d pay to watch, we’re living the dream Clarky, living the dream’.

“Always a laugh, always generous with his time and always great company.

“I’ll raise a glass to a wonderful human and a top friend. And yes, I’ll make sure it’s a pint of Guinness.”

Rod Studd I ‘Nige had so much vibrancy and enthusiasm’

“I’m deeply saddened by it and difficult to compute and comprehend because it makes no sense,” said an emotional Studd.

“I will remember him as a very kind person, a lot of fun. A guy who had so much vibrancy and enthusiasm in his commentary. He really did bring sport to life.”

“When we were in Wolverhampton at the Civic Hall, Nige was at the snack bar and I came along and asked him, ‘what are you up to, Nigel?’ He looked around and said ‘I’m just contemplating a cheese cob’. I don’t know why, but it made us both crack up.

“It became a thing when we messaged each other. He would text me saying ‘what are you up to, old lad?’ I’d reply with ‘I’m just contemplating a cheese cob for lunch’. It became a bit of a catchphrase.”

Studd recalled another hilarious anecdote from a trip to the Citywest Hotel in Dublin for the World Grand Prix.

“The corridor at the Citywest would stretch for hundreds and hundreds of yards and they’d criss-cross each other like a bit of a maze. We’d go back to the hotel and Nige said ‘I’m off the bed’ but he walked off in a direction which I knew was the complete opposite direction of his room. He strode off in some kind of military march.

“I remember saying to myself, ‘he’ll be back in a minute’ and sure enough 10 seconds later the figure of Nigel Pearson swept past me again, this time in the correct direction.

“This would be repeated every time we were there at the Citywest. He’d go off and I’d say ‘he’ll be back in a minute’. It’s so silly, but you can repeat it. It’s part and parcel of a relationship.”

“Well that’s how every conversation started. Nige, with a smile on his face, and ultimately taking the mick! I already miss those conversations.

“I have so many wonderful memories of Nige, he was so warm, so welcoming, so incredibly kind and above all – he just wanted you to succeed. He was as genuine as they come.

“I’ll cherish the times we spent together at darts and around it. I think of just a few weeks ago, after a Premier League night in Belfast – that night was peak Nigel. A Guinness in hand. Talking darts. Talking football (mostly bantering me about Manchester United). Talking family – oh how he loved his family.

“When I think of Nige, I think of his smile, he ALWAYS had a smile on his face.

“Nige, keep smiling up there. We miss you terribly.”

Laura Turner I ‘An iconic voice of our generation’

“Like everyone, I’m still shocked at the sudden passing of Nigel Pearson. Nige was so full of life – passionate, professional and his love of sports (especially speedway, darts and football) was infectious! An iconic voice of our generation, and one which will be greatly missed,” said co-commentator, Turner.

“Away from the mic, Nige was just a wonderful person. Kind and considerate, upbeat and fun to be around – I’ll never forget all the words of encouragement and help he’s given me since joining the team at Sky, and the laughs we’ve all shared!

“My thoughts are with Nigel’s family at this sad time.”

Man dies at car wash after getting stuck between his vehicle and machinery, CA cops say