Ruel Sotiriou has had to wait patiently for his turn.

The 21-year-old made his first-team debut for Leyton Orient back in October 2017 and now, four-and-a-half years later, he is thriving, having become a regular fixture in the starting line-up at Brisbane Road.

On the way, he spent six separate spells away on loan at Heybridge Swifts, Leatherhead, Bishop’s Stortford, Chelmsford City, Hampton & Richmond and then Dover Athletic, stepping up the tiers each time.

Under Ross Embleton and then Jobi McAnuff, he made a combined 36 appearances throughout the second half of the 2019/20 campaign and 2020/21 and continued to be part of Kenny Jackett’s plans when he took over at the club last summer.

He started three of the first six games in all competitions this term, but was then starved of action for the best part of five months and largely restricted to a series of fleeting cameos.

“It was frustrating when we started to lose because I still wasn’t really playing, even then, and I felt like I could have helped earlier and we wouldn’t have been in the relegation scrap,” he says in an exclusive interview with Sky Sports, after being named Sky Bet League Two Player of the Month for March.

“Sometimes these things happen, so I just had to keep going. I feel like when I play a string of games, most of the time, I do well. Earlier in the season, if I was in the team, I felt like I was just taken out as the easy option, rather than based on performances.

“It was just hard to get confidence and fitness back. When it’s stop-start, it’s hard to really get your quality to the highest it can be.”

It was a testing time, particularly given that Jackett’s men won just three games from September 25 to February 22, when he was sacked due to the meagre points return and the fact the club – who had been as high as second in the early months of the season – were hovering just above the bottom two.

In his final 10 games in charge, they scored just two goals and collected two points – and Sotiriou explains his theory as to why the sudden drop-off occurred.

Leyton Orient’s league form under Jackett vs under Wellens

“I feel like the confidence of the group just dropped because we weren’t picking up results and then we didn’t really know what was going on, to be honest,” he continues.

“With the way we played, the boys didn’t really know where to be and there were just a lot of long balls. With the players we have – we have a very technical team, in my opinion – we need the ball at certain players’ feet and the movement from us front boys – I don’t think we had that. I felt like we got away with it a bit at the start of the season.

“I think the turning point, where the boys were really like ‘Oh my God’ was probably after the Carlisle loss [on February 26]. We were obviously taking it seriously, but that was the point where we actually realised we were in the relegation battle.

“Matt Harrold did a very good job when he was in charge as caretaker, but I feel as though we could have got better results for him.”

How Ruel Sotiriou seized his chance

On March 9, Richie Wellens – most recently manager of Doncaster, by whom he was sacked in December – took over in east London and has since brought a breath of fresh air.

With four goals and two assists in the last eight games, the form of Sotiriou – nicknamed Luis Suarez in his younger years “because I could get myself out of the tightest situations” – has been one of the highlights of Wellens’ short time in charge so far.

He has even rejected the chance to add to his collection of Cyprus U21 caps recently in order to help the cause at club level.

The way Orient’s form has picked up before a battle against the drop became feasible has been eye-catching, too.

The lift he brought to morale around the club was almost instant, it appears – and Sotiriou knows that, with neither a play-off push nor a relegation battle now in the equation, next season’s prospects are tantalising.

“He has been top tier. He has just given us that confidence, that freedom back to the players and introduced a proper style of play.

“We haven’t had many training sessions because of all of the games, but before Hartlepool [a 0-0 draw in Wellens’ first game in charge on March 12] we had one Friday session with him and, even in that 45 minutes to one hour, the boys already got the way he wanted to play.

“We played well in the following game against Forest Green and we should have won and then we beat Rochdale 3-1 at home and I feel like everyone could see where we had got to in the space of two games. All the boys have bought into the regime.

“We have gone to a four at the back instead of a three and even from goal-kicks, we are playing now. All the boys are confident with their feet and with us front boys, there’s so much pace and good technical players that if we keep everyone here next season, then the attack will be frightening.

“If we keep going the way we are going and we take it into next season, I reckon we’ll be a real powerhouse. I think Omar Beckles is way too good for this level and then our goalkeeper Lawrence Vigouroux is the best in the league. 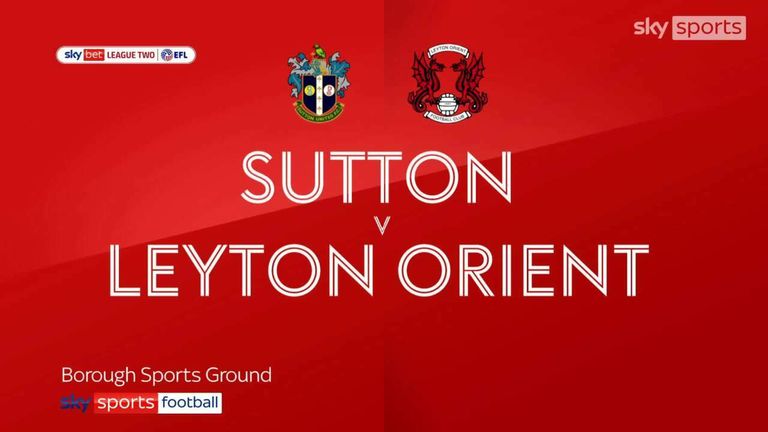 “I see it every day in training and on a matchday; we know some teams are nowhere near us if we get going.”

The big question on everyone’s lips now is whether Orient will be able to keep hold of their breakout star, who is out of contract at the end of the season.

“We haven’t really sat down and looked at the contract properly yet,” he admits.

“I have just been trying to concentrate on my football because we have had loads of games recently. When that decision comes, it comes.”

If Leyton Orient manage to keep hold of Ruel Sotiriou this summer, with the way he has settled with regular game time under his belt, this time next year, they could be on the way to challenging for a return to League One once more.