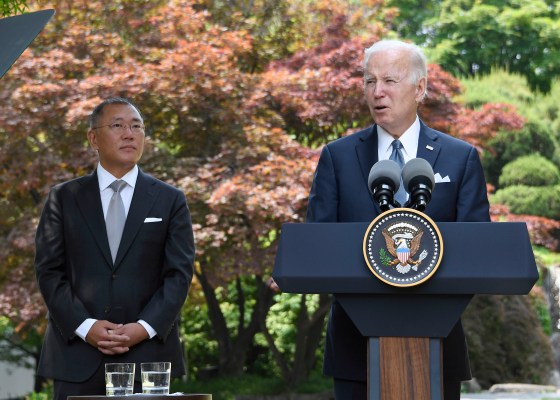 Hyundai said it plans to invest more than $10 billion toward accelerating electrification and autonomous vehicle technology in the U.S. by 2025.

Part of that pot includes the $5.5 billion Hyundai has earmarked for its new EV plant and battery manufacturing facility in Georgia announced Friday. Non-affiliated suppliers are contributing another $1 billion into that project pushing the total cost to $6.5 billion.

The remaining $4.5 billion of Hyundai’s total U.S. investment will go into what the automaker has identified as “key future businesses.” In Hyundai’s view, key future businesses translates to robotics, AI technologies, advanced air mobility and autonomous driving capability. Notably, Hyundai said it will invest its funds through joint ventures and subsidiaries.

The investment will also help Hyundai upgrade R&D operations for its Kia and Genesis brands, the company said.

The new EV factory is the largest economic development deal recruited by Georgia, according to officials. The 2,923-acre site is slated to break ground early next year and begin commercial production in the first half of 2025 with an annual capacity of 300,000 units.

The operations will help Hyundai toward its goal of becoming a top-three EV provider in the U.S. by 2026. Mainly powered by renewable energy sources, the plant will use a highly connected, automated and flexible manufacturing system where robots will assist human workers, Hyundai said.

Hyundai said the plant will produce at least some of the 23 EVs it plans to roll out by 2025. Its battery manufacturing facility will help Hyundai establish a stable supply chain.

In 2020, Hyundai purchased from SoftBank an 80% stake in Boston Dynamics, in a deal that valued the mobile robotics firm at $1.1 billion. Part of its $10 billion investment announced Sunday will go toward creating a robotics value chain, from component manufacturing to logistics.

Boston Dynamics has launched its first two commercial robots, Spot and Stretch, to work in a variety of industries. Spot is being tapped for use in the power utilities, construction, manufacturing, oil and gas and mining industries. Stretch, which is a robot arm that moves boxes, is being marketed for use in warehouse facilities and distribution centers.

The money will also support the Hyundai subsidiary New Horizons Studio, which works on Ultimate Mobility Vehicles such as the Tiger, an autonomous cargo carrier equivalent in size to a carry-on suitcase.

Hyundai said it will “actively support Motional,” meaning the company intends to invest more money into the venture as it progresses toward commercial operations.

Motional will put Hyundai robotaxis, based on the brand’s Ioniq 5 EV, on Lyft’s network in Las Vegas next year, Chief Technology Officer Laura Major said at the TechCrunch Mobility conference on Wednesday. The cars will come with human safety operators but should be able to navigate hotel drop-off and pickup maneuvers autonomously.

With an eye on the sky, Hyundai launched last year Washington D.C.-based Supernal to figure out how to integrate air mobility into existing networks for intermodal travel.

The venture is developing an app for customers to plan their journey using a mix of cars, trains, advanced air mobility, eVTOLs and e-scooters. It aims to begin commercial service in 2028.