Ella Toone: Winning Euro 2022 with England would mean everything, but we want to inspire young girls too | Football News


Manchester United and England forward Ella Toone says winning Euro 2022 with England this summer would “mean everything”, but the chance to inspire the next generation is equally important.

This year’s tournament will take place at 10 venues in eight cities in England between Wednesday July 6 and Sunday July 31, when the Netherlands will look to defend their Euro 2017 title.

And 22-year-old Toone – who has scored 10 goals in just 13 caps for the Lionesses since her debut last February – has spoken of her excitement about the growth of the women’s game and what could be possible on the international stage in the near future.

She spoke to Sky Sports during a visit to the Bloomsbury Football Foundation, an organisation that works with 1,500 girls in London every week and aims to level the playing field for girls by getting more into football and building excitement in the lead up to this summer’s tournament.

Toone said: “I’m really excited for the Euros – it’s going to be a great summer of football. Hopefully we can get as many people as we can to games and to get involved with women’s football.

“It [winning the tournament] would mean everything and that’s what you want to do, you want to win major tournaments with your country.

“But I think, for us, it’s about going there, enjoying ourselves and making ourselves and each other proud and, more importantly, making the nation proud and inspiring a load of young girls to get involved in football.”

Icelandic international Sara Bjork Gunnarsdottir recently criticised tournament organisers’ decision to use the Manchester City Academy Stadium, which has a capacity of less than 5,000 and, while that decision has since been defended, Toone admits she can see the positives.

“It just shows how much the women’s game has grown that we want to sell out bigger stadiums.

“We’ve done really well in our group games to sell out our stadiums and hopefully they can do the same in that stadium. I’m sure there will still be loads of fans watching and supporting.” 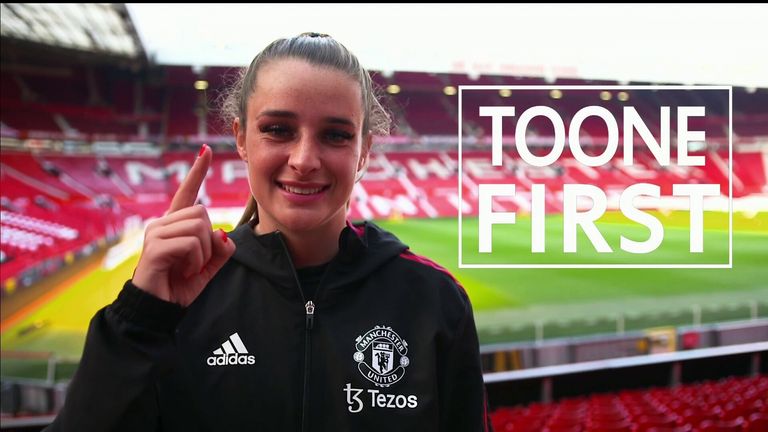 Manchester United’s Ella Toone sits down with Tubes to discuss her firsts in football.

She also spoke about the importance of grassroots football and the part it played in her rise to the Barclays Women’s Super League.

“Grassroots is a big part of my journey and I just want to give back. It’s so important; everyone has a different journey and it all starts with grassroots.

“My dad used to take me down to the local football club and I used to play on the side of the pitch with my brother, my cousins and all the lads and then I went and played for Astley & Tyldesley Girls, my local club, and I was there for a few years before I went to Manchester United. I loved every minute of it.

“My journey was different to everyone else’s but I absolutely love grassroots and it’s what got me so in love with football.”

Did she ever envisage the women’s game growing on the scale it has done over the past few years?

“No, probably not. It’s exciting to be a part of that and to keep helping the women’s game grow and be a role model to young girls now, starting off with football, because that’s something that a lot of us didn’t have when we were younger.

“It’s massive and it’s only going to get bigger.”

Pandemic spike in deaths of homeless people not due to COVID-19, study finds