After a choppy 12 months and a slide during early 2022, semiconductor stocks now look appealing. Shares of many chipmakers are trading at a discount compared to the Index relative to the recent selloff. Micron Technology (NASDAQ:), for example, currently has a forward P/E of 7.4 while Qualcomm’s (NASDAQ:) is 13.1. At the opposite end, NVIDIA’s (NASDAQ:) forward P/E is 48.5, and just for comparison sake, albeit from another sector entirely, Amazon’s (NASDAQ:) forward P/E is now 58.14.

Considering that chip-related stocks are forecast to increase sales and earnings through 2023, they do, indeed, look like a bargain.

The sector fund, iShares Semiconductor ETF (NASDAQ:) is also trading at a discount, having lost 24% of value between its Dec. 28 record and Mar. 15 low. That puts SOXX in an official bear market, where advances are often suspected to be corrections within a downtrend.

Still, some investors insist that SOXX provides a buying opportunity after the recent selloff. The trajectory of its supply and demand doesn’t agree. 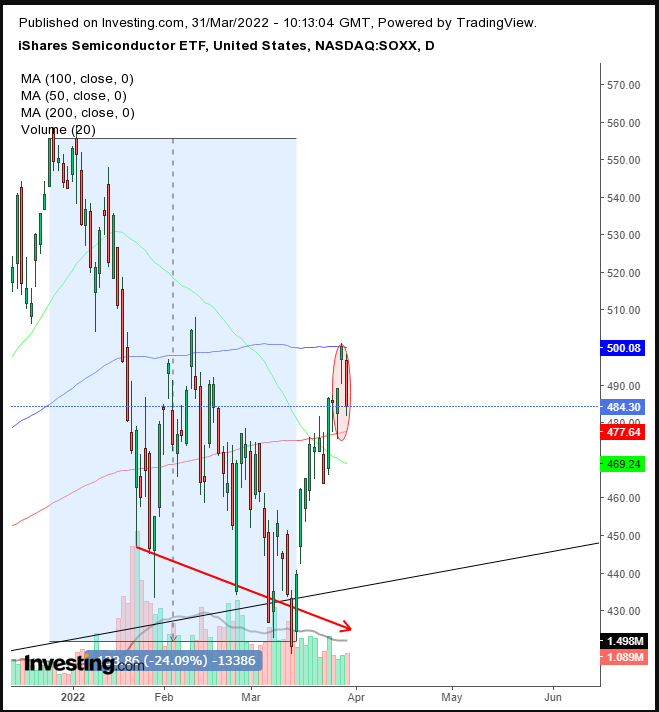 The structure encompasses three trading days that neatly play out the reversal. On the first day, bulls developed a long green candle, which rather hopefully bounced off the 200 DMA. The price opened higher on the second day, reinforcing the appearance of bullish sentiment, creating a Rising Gap.

However, the highs on Feb. 10—marked by the 100 DMA as a boundary line—contained a bearish resistance that erupted on the third day, driving back the bullish attempt, to close deeply within its earlier gains. As a bonus, the middle candlestick developed a Hanging Man, a bearish trap confirmed by yesterday’s long red candle, forcing liquidation of long positions.

While bulls may have been encouraged when the price found support above the 200 DMA, they may have missed that the 50 DMA sank below its longer-dated moving average, demonstrating how current pricing stats are weakening, triggering a Death Cross.

Moreover, the attempted bullish move occurred as volume was drying up, indicating a lack of participation, rendering any movement suspect.

A step back tells a potentially equally bleak story. 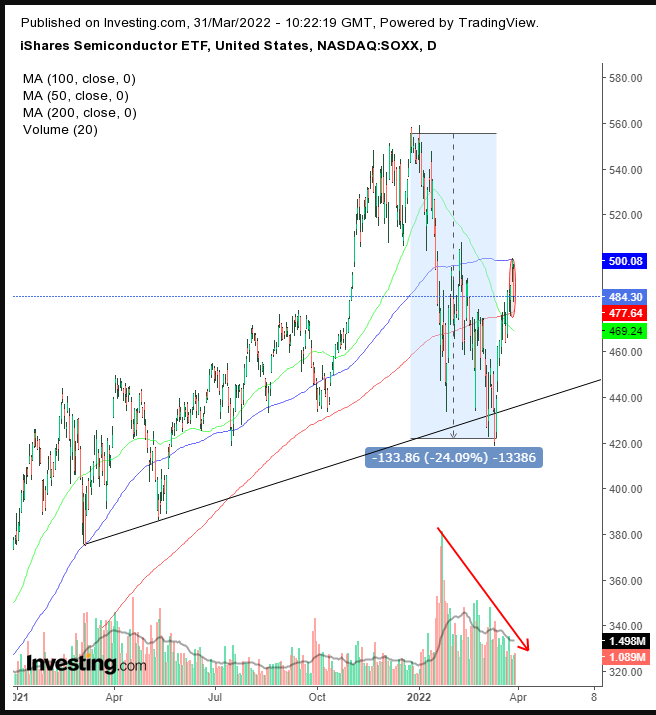 Viewed via a broader timeframe, we realize that the current rally is quite possibly the right shoulder of a massive H&S top, subject to a downside breakout.

Conservative traders should wait for the H&S completion before risking their funds.

Moderate traders would risk a short position if the Evening Star’s price retests.

Aggressive traders could short now, provided they can withstand the whipsaw of a possible return move.

What is the UK’s inflation rate and why is the cost of living going up?