Joco, the docked electric bike service that launched in New York City last April to rival Citi Bike, is pivoting its business away from consumer rides and toward last-mile delivery, the company told TechCrunch. The move comes after Joco was sued by the city for operating a bike share without prior authorization from the NYC Department of Transportation.

While the lawsuit is still active, Joco decided to step away from the wrath of the DOT, which firmly backs Lyft-owned Citi Bike as the exclusive vendor of bike-share services in NYC. The company now says 100% of its customers are either gig economy workers who rent its vehicles at daily or weekly rates or enterprise customers that order dedicated fleets from Joco.

“We were one day in, we had just raised a bunch of money and we were all excited to get going with the vision that we have, and the city and Lyft came at us to try and shut it down,” co-founder Jonathan Cohen told TechCrunch. (Both co-founders are named Jonathan Cohen, but one is from New York and the other from London, so we’ll distinguish them by their geographies henceforth.)

“We were just trying to make the world a more efficient, enjoyable and sustainable place, but looking back it was a huge blessing. We’ve grown in revenue 20x since then and we have five active, large businesses that we work with and that’s expanding pretty fast.”

Joco is now doubling down on delivery and has expanded into Chicago. The company has a total of 2,000 bikes and 50 stations between the two cities so far, and has plans to expand to Boston, Washington, D.C., and Miami in the next three months, said Cohen of New York, adding that Joco has thousands of riders per day between New York and Chicago.

One of Joco’s enterprise customers in NYC is instant commerce startup Jokr, which offers grocery and convenience store items delivered in 15 minutes and recently raised a $260 million Series B. Joco began supplying Jokr with e-bikes at certain warehouse locations last autumn, according to Alex Grubman, Jokr’s head of operations.

“We lease a certain number of bikes from Joco, but I think the interesting thing about Joco’s business model is they have docks around the city, so if we need additional ones, we have that flexibility, so we can always ramp up,” Grubman told TechCrunch, adding that the partnership has grown over the past few months and Jokr will be expanding its Joco fleet.

“Joco has done a great job differentiating itself with the customer service they provide, the maintenance timelines which are a part of the leasing of the bikes,” continued Grubman.

Joco’s biggest competition in the e-bike delivery space is Zoomo, an Australian company that just closed an $80 million Series B raise. Zoomo builds its own e-bikes and either offers them as a weekly subscription for gig workers or as a fleet service, including fleet management software, for enterprise companies, such as Domino’s and DHL.

There are a few differences between the companies, aside from their maturity and reach – Zoomo was founded in 2017 and has since expanded to Canada, the U.S., Spain, France and Germany. Zoomo’s model gives gig workers weekly subscriptions to their own e-bikes for anywhere from $35 per week for part-time couriers to $49 per week for full-time. Riders take the bikes home, charge them, and call Zoomo if they need any servicing or maintenance.

For comparison, renting Joco’s bikes for six hours per day costs either $15 for the day or $49 for the week. Gig workers always park Joco’s bikes at one of the startup’s docked charging stations.

“Anyone can become a delivery driver with no upfront capital investment,” London Cohen said. “For just $15 a day, they can use an e-bike for up to six hours at a time with unlimited bike swaps. So as soon as the bike runs out of battery, they simply go to one of our dense network of hubs and swap it out for another bike and can continue making money.”

The ease of entry has resulted in a “sticky” service, where customer retention is high and growing daily, with next to zero investment in marketing,  London Cohen said.

Joco has been engaging in a grassroots-type marketing effort to bring on more delivery drivers and learn more about its customer base. For example, the company holds meetups at stations where they give riders free pizza and ask them what they want in a service, which is why Joco started creating branded handlebar covers for riders to keep their hands warm in winter. 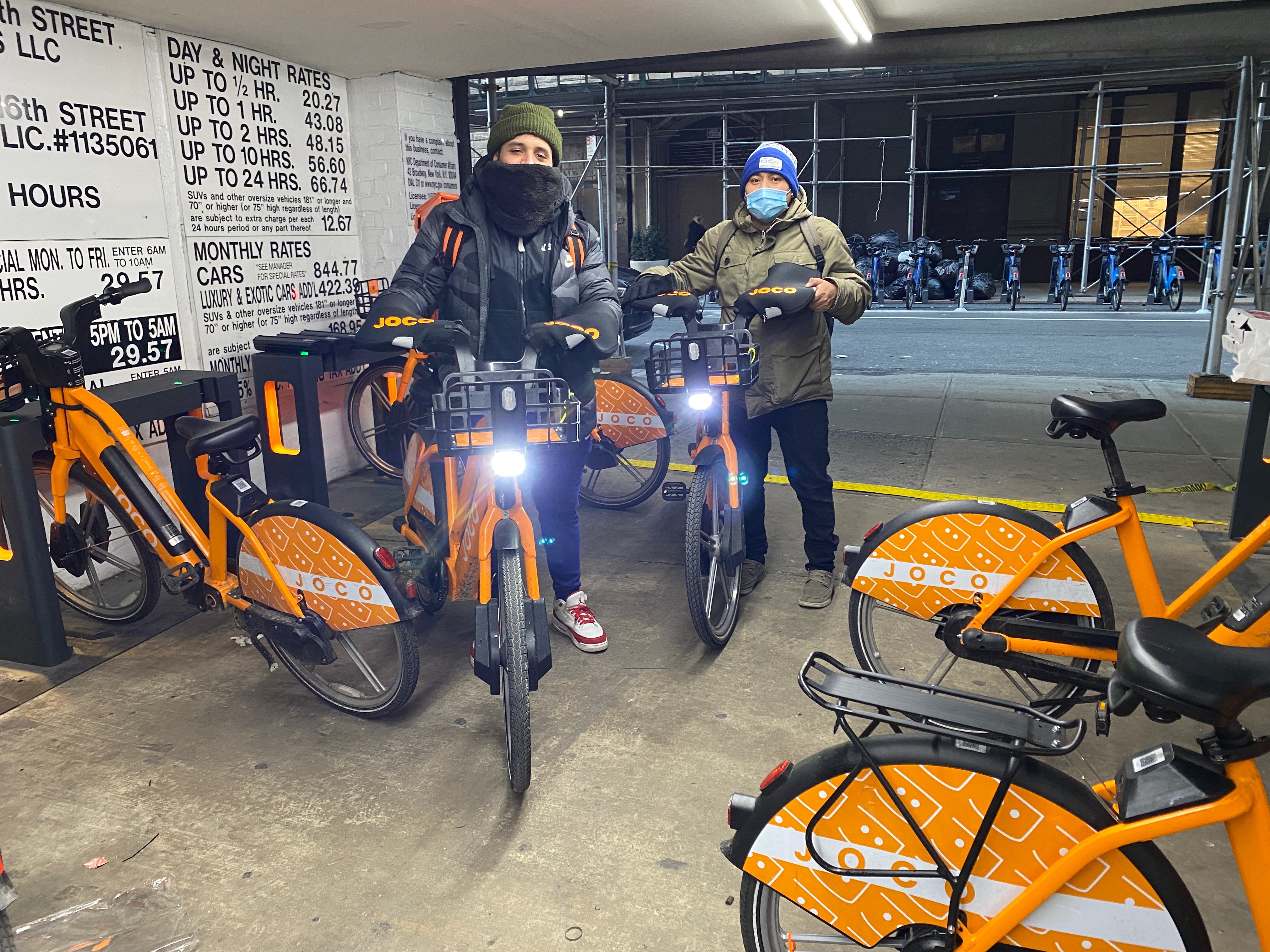 Aside from purchasing vehicles and equipment, Joco’s other biggest expenditure is on leases with private parking garages where it places its bikes. Docked charging stations have helped the company almost eliminate the costs that have stunted profitability for dockless micromobility companies, like charging vehicles and maintenance, Cohen of London said. There is no chore of finding and charging e-bikes, and since the bikes don’t live on the street, they see much less wear and tear.

Joco said it takes capital from contracts with enterprise customers and revenue from gig workers, money it then reinvests in the business for sustainable growth.

Obviously, to continue to score clients and expand nationally, Joco will need to raise more money. It has secured “a couple million” so far, according to Cohen of New York, which helped with initial capex, but is in the middle of a Series A raise to continue to grow.

The main snag in Joco’s upward mobility, however, is its ongoing legal battle with New York City, one that could repeat itself in other cities as the company expands into new markets.

The NYC DOT has had a contract with Citi Bike since 2012 that has provided the city about $1.5 million in revenue to date, according to the lawsuit filed by the city against Joco.

The contract gives Citi Bike the exclusive right to operate a bike-share system within a designated zone, which includes all of Manhattan and much of the outer boroughs. Lyft is investing $300 million to expand the system, a private capital investment that is somewhat contingent on Lyft not having any competition on the ground.

And then there was Joco, flaunting its docked bike stations full of electric bikes in Manhattan and parts of Queens. Lyft operates e-bikes in nine cities across the U.S., but only about 40% of its total fleet is electric, Alex Wade, a spokesperson for Lyft, told TechCrunch.

Now Joco only offers daily or weekly passes, which the company says keeps it clear of being defined as a public bike share service that needs authorization from the NYC DOT.

The NYC DOT could not be reached to confirm or deny whether Joco’s pivot would put it outside its realm of regulation, despite multiple attempts from TechCrunch to make contact.

While Joco’s bikes were, and remain, publicly available, they do not begin or end on public highways since the bikes are parked on private property. Joco argued as much in court back in May, when the courts denied the city’s request to temporarily halt Joco’s operations until a future hearing, which happened in June.

At the end of that month, a notice of entry was filed, which served to alert Joco that an order was entered into court in favor of the city’s motion for a preliminary injunction, or halting Joco’s operations. The court agreed with the city’s interpretation of the bike share definition that focuses less on rides beginning and ending on public highways and more on the use of public highways.

“It appears undisputed that all of the bike sharing trips by Joco begin and end within the City of New York,” wrote the Honorable Lyle E. Frank in the notice of entry. “It also appears undisputed that virtually all of the riding of these bikes occurs on the public highways, as defined in the rule, in New York City. It seems odd for the City to have adopted the rule if it was only going to apply to bike share programs that were situated on the public roadway. Thus, any bike share program that began anywhere on a sidewalk, or any other public location that was adjacent to a public highway that was not technically a public highway would likewise not be subject to authorization. That argument strains credulity and the Court declines to adopt it.”

Joco appealed the decision two days later, and that decision is pending.

The founders, however, don’t seem bothered by the court’s decision since they are now, as they say, completely keen on following the delivery route. The company says 100% of its riders are now only in the delivery space, despite the fact that Joco’s app is still open to whomever and doesn’t seem to query the user for their purpose for riding. The company’s website copy is still largely geared toward commuters, with one page dedicated to delivery, something the Cohens said they are working on updating.

“We’re targeting delivery riders,” the New York Cohen said. When pressed on how, exactly, he answered, “The people we market to, even if you look at our Instagram, the last five posts, even more, are all about delivery.”

Out of Joco’s last five posts on Instagram at the time of this writing, none were geared toward delivery. Out of Joco’s 48 total posts, only six inherently talk about delivery, and one video does display a delivery rider within the larger frame of offering winter riding tips.

Despite this, Joco holds firm that it’s chasing delivery drivers and that even though its bikes are technically available to the public, commuters don’t use them.

“Most people who are looking to ride, commuters included, are looking for 10- or 15-minute rides,” said Cohen from New York, something Joco no longer offers. “So we’re not precluding them from doing it, it’s just they’re not the target customer. Someone doing deliveries can go to a tourist bike shop, but they’re probably not going to.”

Your Work is Not Your Life – Chasing Life